Painted Fabrics Ltd was founded in 1917 at the former RFC Women's camp at Norton by Annie Bindon-Carter who, together with 3 other art school students, had volunteered at Wharncliffe War Hospital, during WW1, assisting the rehabilitation of injured servicemen through informal art classes.

The former buildings of the Women's Camp became print and design workshops and accommodation was supplied to the men and their families.[3]

They enabled amputees and sufferers from shell shock to hand-print designs onto various fabrics, which were made up into ‘Painted Fabrics products’, including dresses, ecclesiastical garments, table cloths and curtains.

The company were conferred with several Royal Warrants.  Products were sold as luxury products in through many outlets, including Liberty's of London. 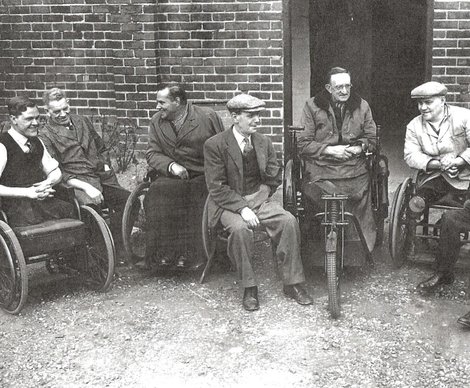 The WW1 RFC Women's Camp was sited between Little Norton Lane and Meadowhead.

Although very alike in many respects to the men's camps, almost all of the buildings had brick walls. This was probably a major factor taken into account when the site was developed after the war as the Painted Fabrics workshops for disabled ex-Servicemen.

During WW1 the women slept in 26 dormitories, 70ft long by 20ft wide, plus 4 cubicles in a separate building. There were 2 dining rooms and a laundry. Many of the RFC women lived away from the camp.

Many of the Images below are courtesy of Sheffield Museums

“Several firms moved to part of this site”, fronting Little Norton Lane.  One firm was Marston Excelsior Radiators of Edmund Road and ICI may have come from Moore Street.

Railings were erected around the area and it was guarded by a sentry at the entrance, which was near the end where the path goes through to Meadowhead.

The long building nearest and parallel to Little Norton Lane was the Canopy Workshop.  Here Perspex canopies were made for Spitfire fighter planes. These were given a final polish with metal polish.

Bulletproof aeroplane windscreens were made and the horse-shoe shaped frame into which the windscreen fitted.  The frame was made of Alclad – by sandwiching a sheet of Duraluminium between 2 sheets of aluminium.  To soften the frames for shaping it was placed in baths of a heated sodium salt and then beaten out.

Other products produced were oil coolers and undercarriage leg fairing – which are the covers which fold in to the underside of a plane when the wheels are retracted.”

Text in this format is from "Norton in Wartime" NHG pub 1995.